What’s with that jumper?

If you head to Camberwell Sports Ground or perhaps Lynden Park late in the day on a Sunday afternoon this winter, you might see this jumper running around. 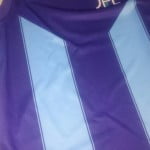 This is the Sharks’ Heritage jumper, being worn for the first time in a long time this season by the Sharks’ Colts teams.

Colts is the eldest age group in the junior competition and is comprised of combined U16 & U17 players. Sharks will enter two Colts team in 2016. Many clubs in the YJFL distinguish their Colts sides with a heritage jumper.

The Camberwell Sharks was formed in the early nineteen-ninties through a merger of the Highfield Sharks and the Camberwell Easties.The Hightfield Sharks club fielded both junior and senior teams, and wore this striking sky and royal blue striped jumper. 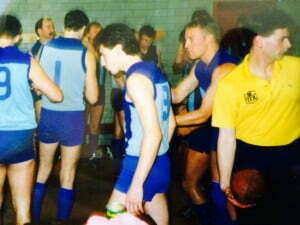